As One with Authority: The Mandate of Biblical Exposition 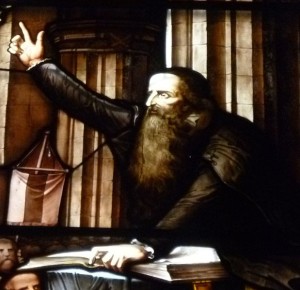 On December 12, 2008, I preached a message on the same text and theme to the graduating class of The Southern Baptist Theological Seminary:

In 1971, just six years after being invited to teach New Testament and preaching at the Graduate Seminary of Phillips University, Fred Craddock put his thoughts on preaching into a book. That book, As One Without Authority, launched something of a revolution in preaching. Craddock proposed that preaching was on trial in the contemporary church, and that it was fast becoming an anachronism.

He reflected that the church might “celebrate the memory of preaching in ways appropriate to her gratitude and to affix plaques on old pulpits as an aid to those who tour the churches.” Yet, he warned, “the church cannot live on the thin diet of fond memories.”

Why did Craddock see such disaster for the pulpit? Among other contributing factors, Craddock cited “the loss of certainty and the increase in tentativeness on the part of the preacher.”

Rarely, if ever, in the history of the church have so many firm periods slumped into commas and so many triumphant exclamation marks curled into question marks. Those who speak with strong conviction on a topic are suspected of the heresy of premature finality. Permanent temples are to be abandoned as houses of idolatry; the true people of God are in tents again. It is the age of journalistic theology; even the Bible is out in paperback.

As a rule, younger ministers are keenly aware of the factors discussed above, and their preaching reflects it. Their predecessors ascended the pulpit to speak of the eternal certainties, truths etched forever in the granite of absolute reality, matters framed for proclamation, not for discussion. But where have all the absolutes gone? The old thunderbolts rust in the attic while the minister tries to lead his people through the morass of relativities and proximate possibilities, and the difficulties involved in finding and articulating a faith are not the congregation’s alone; they are the minister’s as well. How can he preach with a changing mind? How can he, facing new situations by the hour, speak the approximate word? He wants to speak and yet he needs more time for more certainty before speaking. His is often the misery of one who is always pregnant but never ready to give birth.

Craddock’s eloquent way of describing this looming disaster in the pulpit still impresses: periods turned to commas and exclamation points curled into question marks; thunderbolts are left in the attic as the preacher suffers as one pregnant but never able to give birth. This is an eloquent warning, but it is a seductive eloquence.

Professor Craddock’s warning retains the ring of the contemporary almost four decades after it was sounded. His description of the pulpit’s problem remains cogent and even prophetic when we observe the emaciated state of preaching in far too many churches. The last thing one expects to hear from many pulpits is a thunderbolt.

The title of Craddock’s book says it all: As One Without Authority. The biblical reference is all too clear. In Matthew 7:28-29 we read, “And when Jesus finished these sayings, the crowds were astonished at his teaching, for he was teaching them as one who had authority, and not as their scribes.”

Thus concludes the Sermon on the Mount. Matthew has just taken us through the Sermon and we have heard Jesus set forth a vision of life in the Kingdom of God that transcends our moral imagination and explodes our theological comforts. We thought we knew what God required of us. No murder and no adultery, for example. But Jesus now demands no anger and no lust. “You have heard it was said,” he begins, “but I say to you,” he concludes.

Jesus refused to act like an argumentative theologian or a speculative moralist. He rejected rabbinical reasoning and moral casuistry. He warns of hell and commands that we love our enemies. He warns us not to trust our bank accounts or retirement plans but to lay up treasures in heaven. He reminds us that we cannot add a day to our lives nor an inch to our height, but assures us that our heavenly Father will clothe us in more glory than the lilies of the field and care for us even more than he cares for the birds of the air.

He tells us to seek first the kingdom of God and his righteousness, and promises that all these things will be added to us. We are instructed to judge a tree by its fruit, even as we shall be judged. We are to build our house upon a rock and not upon the sand, for the house on the rock stands while the house on the sand falls, “and great was the fall of it" (Matt 7:27).

Jesus has turned our world upside down. The ones we thought were blessed are now cursed, and the ones we saw as cursed are promised to be blessed. We hear Jesus warn that some who sure look like prophets are false, and we hear him say that his judgment will be definitive: “I never knew you" (Matt 7:23).

Then we hear from the crowd: “And when Jesus finished these sayings, the crowds were astonished at his teaching, for he was teaching them as one who had authority, and not as their scribes" (Matt 7:28-29).

The radical nature of Jesus’ ministry and teaching is on full display here, and it is all established upon his own authority. When Jesus teaches, he does not cite human authorities, enter into irrelevant debates, or cushion his words. He speaks on his own authority. He will make that authority clear by healing the sick, casting our demons, staring down the religious authorities, and, most clearly, by forgiving sins. At the end of Matthew’s gospel, he will announce that all authority in heaven and on earth has been granted him, and he will send his disciples out into the world as ambassadors of the Gospel.

Matthew tells us that the crowds were astonished at his teaching—astonished. They had never seen or heard anything like this. Every teacher they had ever heard cited other teachers as authorities. Their teachers hemmed and hawed, proposed and retracted, pitted one interpretation against another, and left themselves room for qualification.

The crowds recognized that Jesus teaches with an authority that is unprecedented and singular. He was teaching “as one who had authority, and not as their scribes.”

The scribes were the licensed teachers of the law. They interpreted the law by investigating precedent and tradition. Their rulings were approximate and carefully hedged. Nothing was conclusive. Tradition was placed upon tradition; interpretation laid alongside interpretation.

Jesus has already told the crowd that their righteousness must exceed that of the scribes and the Pharisees. Now, the crowd sees that the scribes’ authority is also just not enough. Once they have heard Jesus, they will never again listen to one without authority—nor should they.

The situation Fred Craddock described still defines far too many pulpits today. His prescription was inductive preaching—preaching that leaves the big questions unanswered, that lets the congregation come to its own conclusion. This is not the method of Jesus. Jesus uses induction in his teaching, but he never leaves the big questions unanswered—nor can we. He speaks as God. We speak as his preachers.

The preacher’s authority is a delegated authority, but a real authority. We are assigned the task of feeding the flock of God, of teaching the church, of preaching the Word. We do not speak as one who possesses authority, but as one who is called to serve the church by proclaiming, expounding, applying, and declaring the Word of God. We are those who have been called to a task and set apart for mission, as vessels who hold a saving message even as earthen vessels hold water.

The crowds were astonished when they heard Jesus, “for he was teaching them as one who had authority, and not as their scribes” (Matt 7:29). Congregations are starving for the astonishment of hearing the preacher teach and preach on the authority of the Word of God. If there is a crisis in preaching, it is a crisis of confidence in the Word. If there is a road to recovery, it will be mapped by a return to biblical preaching.

Our hope and prayer is that you will go forth from here to fulfill a ministry of astonishment. To preach and teach and minister so that commas are turned back to periods, and question marks into exclamation points. Congregations long to have the thunderbolts brought down from the attic and loosed in their midst. They are starving for a word from God.

If you go out and preach as one who has authority, you will be constantly amazed by what God does through the preaching of his Word. You will see those who hear you astonished—and no one will be more astonished than yourself.